This weekend I visited The Whitworth Gallery to see the Beyond Dementia exhibition.

Beyond Dementia looks at how to ‘live well’ after being diagnosed with dementia. The exhibition was curated by Fabulous Forgetful Friends and included their stories as letters, art, or in Phil’s case a playlist of his favorite music.

The exhibition provided a great space for raising awareness of dementia, reflection on dementia and to tell the stories of those living with dementia from their own point of view.  It allows visitors to think about what dementia means, how they feel about it and what they can do to raise awareness and be part of a dementia-friendly community.

Beyond Dementia showcases how those living with dementia can still live full and exciting lives alongside their families and communities. It looks to break the negative imagery after diagnosis and show that there are ways to live positively.

Ronnie Lomax one of the Fabulous Forgetful Friends said ‘I hope that our display will play a part in changing our communities’ views of dementia and let us live for the moments we’re in. Please remember even within the illness we remain very much individuals ’  (The Whitworth, 2017)

Phil and Ronnie were the stars of the show, they collaborated with printmaker sally Gilford on a T-shirt/tote bag design inspired by the rolling stones logo and punk lettering. The design read ‘Dementia Sucks, but we are licking it’ see the design in the image below on the exhibition mirror.

Ronnie was diagnosed with vascular dementia at 42 following a stroke in 2002, as he was under the age of 65 this is considered to be young-onset dementia. According to the Alzheimer’s society ‘It is estimated that there are 42,325 people in the UK who have been diagnosed with young onset dementia.  (Ref Dementia UK, 2nd edition 2014, Alzheimer’s Society).  They represent around 5% of the 850,000 people with dementia.’

In a video interview with Ronnie, he talked about how being diagnosed at such an early age meant people viewed his symptoms with skepticism ‘it was put down to other things like work stress’ he said. After his stroke, he mentioned that it was the ‘goodness and encouragement of his grandchildren’ that got him speaking again. For me, this highlighted again the importance of intergenerational interaction no matter your age spending time with younger or older generations can enhance your health and wellbeing. This is a recurring theme in my PhD thoughts and something I looked at in my final undergraduate collection: Colour Connection and Thermochromic Shirts.

In 2005 Ronnie wrote a poem called the Forgotten:

The passage of life you cannot control some daysare good,
some days are bad

The invisible illness is so sad

So look at life and you will see,
how it can change both you and me

Struggling to capture the present for my future

The lights are on, but no ones at home,
The family all here, but you still feel, so alone

Waiting, hoping pictures will stay
to stop the sands of time slowly trickling away

So theft of thoughts and right words to say

Many past and present memories have gone away

So with your support in our lives,
let’s educate our communities to understand

Ronnie has shared his story on many platforms in order to raise awareness of dementia – read more about his story here and here.

One of the best parts of the exhibition was an area for visitors to share thoughts on dementia, below are some of my favorite reflections from the public. 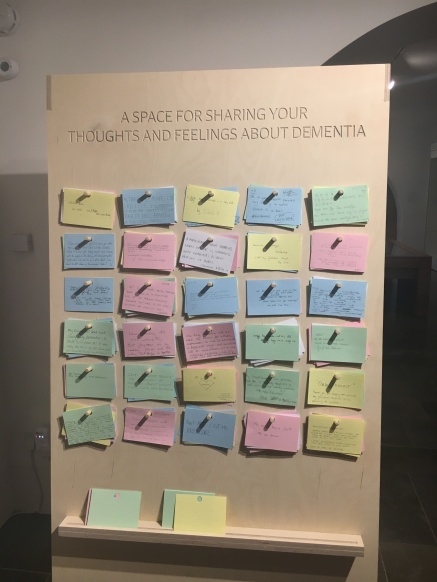 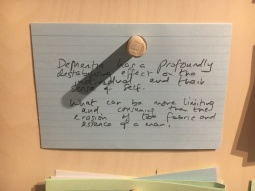